The Book of the Board

David Fishel’s The Book of the Board: Effective governance for non-profit organisations, Second Edition (2008) is a comprehensive manual on all things relating to non-profit boards.

The Book of the Board is an ideal introduction to the intricacies of board membership for those who are new to the role but it will also be equally valuable to veteran board members looking to corroborate their ideas or consolidate their expertise. Fishel seeks to empower board members to contribute to their organisation and assist them in navigating some of the challenges they may face in a non-profit governance role. The Book of the Board is a unique resource for board members because, unlike many other books on this subject, it is distinctively Australian and was produced specifically for non-profit organisations.

David Fishel is a Brisbane-based consultant who provides specialised advice, training and board development services for organisations in Australia and internationally. Fishel also has experience as a board member of a variety of organisations and as a Chair of two. The Book of the Board combines academic research with first-hand accounts in order to develop complex portrait of the non-profit sector and the board’s place in it.

Alongside advice based on Fishel’s first-hand experiences of boards, the book contains contributions from Gavin Nicholson, Louise Walsh and Judith James and includes separate chapters penned by Myles McGregor-Lowndes and Elizabeth Jameson, two prominent voices in the sector. Fishel also incorporates short interviews with the Chief Executive Officer and Chairperson of a number of different Australian non-profit organisations, including the Environmental Defender’s Office, Netball Australia and The Foundation for Young Australians.

The second edition of The Book of the Board incorporates a number of changes from the 2003 first edition. Fishel has consolidated the original 17 chapters into 12 chapters, introduced a new chapter on alliances and mergers and addresses recent developments within the non-profit sector. In addition to this, the resources, checklists and suggested further reading have been updated.

Despite its technical contents, The Book of the Board is surprisingly readable. Fishel breaks down each chapter into smaller units with clear sub-headings. Each section of the text contains a good mix of different forms of writing and Fishel blends dot-point lists, tables and graphics into the blocks of text preventing the book from being a chore to consume and ensuring that the content does not become dry. Fishel’s tone is energetic and dynamic, demonstrating an enthusiasm for the subject that will be encouraging for both prospective board members and those who are unfamiliar with the sector.

Fishel’s depiction of the non-profit sector and his advice for board members does not rely exclusively on his own experiences, but engages with the extensive discourse surrounding leadership in the non-profit sector. Fishel addresses both the ideas of his peers as well as academic thinking on the subject. The Book of the Board is well researched, closely revised and has evidently benefitted from excellent planning in its development. Fishel grounds his advice in the historical context of the non-profit sector by describing the many forces that are at work on non-profit organisations and, for example, the growing need for these organisations to compete with commercial businesses.

The 12 chapters of The Book of the Board address the general themes of board responsibilities, operations and effectiveness. The most useful and detail-oriented chapters focus on risk management, compliance with legal responsibilities and financial planning and control. Other chapters relating to fundraising and alliances and mergers also offer a unique commentary on issues that are often not addressed in similar texts.

The Book of the Board is practical rather than simply technical; Fishel proposes specific tactics and procedures rather than merely imparting general principles. Perhaps the most noteworthy feature of this book, that which sets it apart from other textbooks on this subject, is the recommendations of additional resources on each particular topic. The addition of suggestions for further reading at the end of each chapter indicates that Fishel recognises that other voices and sources have more to offer on particular subjects and that his book is particularly effective as a launching pad for further research on areas of interest or concern for board members.

The Book of the Board will be useful to both those who are new to board membership and those who wish to expand their proficiency in particular areas or for certain skills. It is a general text, but makes and an ideal gateway to more specialised learning on a range of issues concerning the governance of non-profit boards. Given its logical structure and visual directness it will be easy for readers to quickly access the precise information or guidance they are seeking. The broad range of issues covered by Fishel and the inclusion of practical suggestions and methods for integrating or expanding the intelligence contained within it makes The Book of the Board an indispensable resource for anyone who wishes to more fully understand the intricacies of the governance of non-profit organisations. 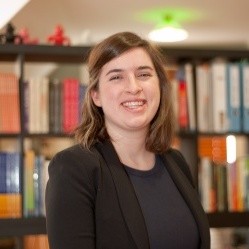 At the time of writing Julia was a writer and researcher at Better Boards. She has a passionate interest in the non-profit sector, particularly its legal and regulatory complexities and she follows all news and developments in this area keenly. Prior to joining Better Boards, Julia served as an intern at Philanthropy Australia. Julia has a Bachelor of Arts from the University of Melbourne, majoring in Political Science and English Literature.