Why Millennials Could Be the Missing Link in Your Boardroom

When it comes to non-executive board positions, Millennials (or Gen Y) are often snubbed in favour of more experienced directors, or overlooked entirely. However, they could be the key to creating the perfect balance in your boardroom.

Of all publicly listed companies in Australia, about 2% of their directors are under the age of 45. The stats are better for the non-profit world but I’d wager that very few of these positions are filled by people under 30.

These statistics have become something of a self-fulfilling prophecy. Younger generations look at the current composition of boardrooms and decide that they stand little-to-zero chance of landing a director role. As such, boards are rarely approached by young, budding directors, and therefore often don’t have the opportunity to take on great Millennials, or even their slightly older peers, Generation X.

But the reality is that normalising the possibility for young people to become involved in the boardroom would be beneficial for everyone. Of course, it’s not hard to tally up a list of reasons why a young person would want to be on a board; the skills learnt, a strong desire to make a difference, networking and career opportunities that would be invaluable for a rising star in any industry. But what about the benefits for a board? Let’s take a look at some ways that bringing Millennials into the boardroom would be beneficial to not just the board but the organisation as a whole.

The Growing Trend in Diversity

This is one of the hot topics in the governance space in recent years and with good reason. Let’s be honest, as most directors who have sat or are sitting on a board will know, they tend to be dominated by older white men. And while the number of women entering the boardroom is on the rise, change is painfully slow.

If managed well (i.e. with high emotional intelligence), an eclectic group of directors means a greater variety of input, healthier debates, and insights and experience that can give a boardroom greater scope when assessing the industry landscape, managing risks and steps the organisation can take in going forward. On top of this, diverse boardrooms attract more diverse donors and grant-makers.

So, where do Millennials come into a diverse boardroom? It is, of course, important to have directors from all walks of life, including gender, culture and ethnicity. But to maximise on this eclecticism, it’s vital to have directors of all ages too.

The Exuberance of Youth

Besides simply providing a board with a youthful edge, Millennials also provide invaluable insight, knowledge and energy. Of course, we all know that Millennials are digital natives, meaning they have a far more natural understanding of technology and social media than your typical director. But their value extends far beyond that. The exuberance offered by young directors I’ve worked with is a breath of fresh air in the boardroom, stimulating the rest of the board as well as pushing projects forward at a quicker, more dynamic rate.

Another trait that comes so naturally to Millennials – and that boards are in such dire need of – is their ability to problem-solve and take risks. The conservative approach that many boards take is often stultifying. They tend to be risk averse especially when it comes to new ideas and concepts, like digital engagement with audiences, and therefore instinctively choose the safer route, even if it’s not the wisest one. A youthful energy in a boardroom can help to mitigate these patterns and provide some much-needed momentum.

While boardrooms may still be skeptical of bringing Millennials into the fray, other areas of business have welcomed them with open arms, and they’re enjoying the benefits of engaging with this young, dynamic generation. In the US, Millennials now outnumber baby boomers in the workforce, at 83.1 million to 75.4 million; and the average employee age at the world’s top five tech companies is between 28 and 31.

Would the “Millennial Effect” be effective in the boardroom, though? The evidence suggests that, given the opportunity, younger generations would rise to the challenge and relish it. The boards of non-profits FYA and CanTeen are dominated by younger generations, and they’re reaping the benefits of their innovative and swashbuckling approach. Likewise, I’ve had the pleasure of working with directors as young as 21 who’ve found director roles at the Future Business Council.

All of this points to a need for boardrooms to not only be more open to the idea of accepting Millennials into director roles, but also to actively seek them out. This isn’t just important for the future of the next wave of directors, it’s important for the success of existing boards.

None of this is to say, however, that bringing Millennials into your boardroom doesn’t come with risks. It does. Boards need to do their homework and hire the right person for the role, not putting too much precedence on age. But this is a caveat that every board should be aware of whenever they take on a new director. 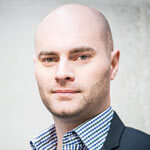 Paul Smith is Co-founder and CEO, Future Directors Institute and Chair, Jane Goodall Institute Australia. aul is a social entrepreneur with a passion for unlocking boardroom potential and better outcomes via the power of intergenerational diversity. Utilised effectively, diversity is a lever for driving more purposeful practices and Paul is dedicated to helping next generation leaders impact and influence governance in the “new economy”. Paul is also co-founder of Start-up Boardroom which helps organisations build their boards, he is Chair of the Jane Goodall Institute Australia and involved in a number of global committees. He is also an advisor/mentor to number of start-ups.