Developing the Next Generation of ‘Givers’

When I was young it was normal for our family and friends to spend time helping a friend build a shed, dig a garden for our elderly neighbours, share a feast of home grown fruit or vegetables, invite newcomers to a welcome bar-b-q and to visit others who had exciting and different foods to share – especially “exotic” Greek or Italian food. Our spare time activities revolved around community – winter and summer sports, community action and fundraising, local art groups, local theatre etc. My grandparents, parents, our relatives and friends and a tribe of kids were all involved, and we had lots of fun.

Mum and Dad gave with no strings attached – and both worked full-time outside the home all their working lives. Dad was well known as the best man to cater for any event that required feeding lots of people, produce home brew for the footy club celebrations (when beer was very scarce after WW2), teach the limbless returned soldiers to swim again, coach promising young high-board divers and run the swimming club. Mum and Dad were also known as good advocates for people who needed help understanding government forms or dealing with unscrupulous salespeople. Mum was always writing “letters to the editor” – and following up with action groups to get better services in our community.

From age 6 I was holding the tape at athletics, running the results back to the scorekeeper, inviting newly arrived kids into our activities and making sure Dad or Mum knew when their parents needed a spokesperson or advocate. My 7 year old cousin was “in charge” of a group of 5 year olds walking to school and took her responsibilities very seriously. We baked special dog biscuits to give to the dog pound pooches, sold raffle tickets door-to-door and we had a paper round and collected bottles for cash to give to a local orphanage.

If this sounds a bit “Pollyanna-ish”, I also remember when my brothers and I ate all the Girl Guide biscuits we were supposed to sell and once I made a good effort at donating my younger brother to the orphanage we were working hard to support.

Our activities were small scale and local and we had lots of fun. We were usually engaged with an interested adult and we received warm appreciation for our efforts. Our parents talked and took action and we watched until they enticed us into action too. The fun element was a very important factor!

I am aware that the world has changed quite dramatically from the 1950s and 1960s when I was having all this fun. But, having fun in community service is not a lost art. It simply needs re-discovering. To risk a huge generalization, relatively well-off Australians often complain about being busier, less content, more fearful and more stressed than ever before. Parents complain that kids seem to have “everything” and always want more. Parents also want their kids to be happy and to have fulfilling, enriched lives.

If you are concerned about developing our next generation of “givers” or about changing the kids in your circle from “gimme-gimme” to kids who know about the pleasure of giving – you need a plan.

Carol Weisman in her book “Raising Charitable Children”1 points out that children today are inundated with messages about consuming rather than giving. But “putting a cell phone in their pocket and the right shoes on their feet” will not make them happy or enrich their lives. What we could be doing instead is helping them experience the “warmth of human contact – the warmth that comes from giving more than receiving”.

I found two other important messages in Carol’s book – it doesn’t take much to show kids how great giving can feel and if you don’t give it is a bit hard to expect your children to do so.

Recently, I spoke with a mother of two boys who takes the boys with her to work in a local charity shop at least once per month. The boys go to a prestigious private school and were a bit reluctant at first. Their mother persisted because “it is important for the boys to know how lucky they are and to think of others”. The family conversations about giving have led to other acts of charity and philanthropy suggested by the boys.

When the grandchildren arrived, I adopted Carol’s “birthday gift donation” idea. For each grandchild’s birthday we make a small financial donation to the charity or not-for-profit of their choice. The donation is not instead of a birthday gift – it is an additional gift so that young children do not experience giving as personal deprivation. Whenever possible, we help the child to make the donation in person and to find out more about the work of their chosen charity. The prospect of choosing a charity for their next birthday gift has made the children very aware of charitable work, the needs of others and the chance to give to a project of personal concern. As the kids get older we may decide to join up all the small donations and give a more significant sum to one group that the children choose collectively.

As they get older and go on to higher education, I will encourage them to work with other students who are funding their own trips to developing countries to help out in so many ways. These students always say they ‘get much more than they give’ out of this work in terms of life, learning, world awareness and expanded friendships.

As adults we talk about our own giving and the work of the groups to whom we donate and why we think it is important. I talk about the pleasure it is to work with not-for-profit board members who give their time, skills and energy so freely.

In thinking about encouraging the next generation of ‘givers’, a few questions from contemporary not-for-profit work emerge for me:

How would this conversation go if we were to talk about paying board members to serve not-for-profits?
What would we lose/gain if that became the norm?
Why is payment the response to increasing complexity of board service?
What actions could we take together to reduce the complexity and encourage more and more people to join in the art of giving?

This article was originally published in the 2013 Better Boards Conference Magazine. 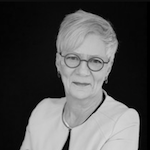 Sallie’s work was informed by over 45 years’ involvement in NFPs – as a board member, senior manager, trainer, consultant, lecturer, researcher and senior public servant. Sallie spent 13 years as a senior lecturer in adult education and nonprofit governance and management at the University of Technology, Sydney and has consulted with hundreds of NFPs across Australia.